Hip resurfacing provides excellent results to young patients with hip arthritis, however the operation is technically demanding and if done incorrectly can cause significant problems. When performing the operation, research has shown that the accurate placement of the new joint is crucial in preventing complications such as fracture and early failure, due to high levels of metal particles released from the hip.

Computer navigation provides the solution to many of the problems that patients have encountered following hip resurfacing. The computer navigation system works by combining computers, infrared cameras and instruments that reflect infrared light back to the camera. The computer system creates an image of the hip joint during the operation, and it coordinates reference points on the natural hip to those on the new hip. This permits the surgeon to finely adjust the position of the new hip with certainty, so that he can orientate the replacement joint to function optimally with the bones, muscle, ligaments, and other structures around them. The surgeon is always in control of the operation and only uses the computer to provide information on where to place the new hip. When using the computer navigation it requires pins to be temporarily inserted into the bone that are then removed once the new hip is inserted. This requires two very small (half a cm long) cuts to be made on the skin over the pelvis bone in addition to the standard scar over the side of the hip, which is used to insert the new hip.

More recently, there has been increasing interest in the problems that can develop in patients with metal on metal joints such as with a hip resurfacing. The cause of these problems may be multi-factorial, including poor choice of device (not all hip resurfacings have the same design and material properties); patients’ immune response to metal particles; the size of the patients’ own hip joint (smaller boned patients are more at risk) and certainly the position that the hip resurfacing is put in. Computer navigation can very precisely place the hip resurfacing components to try and reduce the complications of poor positioning, which leads to patients developing problems with their hip resurfacing.

The computer technology is still rapidly advancing with the new systems generating a “virtual model” of the patients’ hip and then calculating what the optimum position the hip should be placed in, to provide the individual patient with the very best result. This is due to the fact that different peoples’ hips are all slightly different and therefore a “one position fits all” approach does not provide the optimum solution. The computer is clever enough to do a huge number of calculations, once it knows certain information about the patients’ hip, which provides the surgeon with the information required to place the hip resurfacing in the perfect position for that patient.

Unfortunately, computer navigation in hip resurfacing is still not used by all surgeons despite the obvious advantages. In England and Wales, only 3% of all hip resurfacings are performed with this technology, however, many of these procedures did not use the technology for the socket side of the operation, which is where the computer can give much of its assistance. Mr Davis is one of only a few surgeons in the UK that uses the computer navigation for both sides of the hip resurfacing. One of the main reasons why this technology is not more widespread is that it can take longer to perform the surgery until the surgeon becomes skilled in using the information provided by the computer and the use of different instruments. However, this extra time is minimal compared to the benefits that it provides. 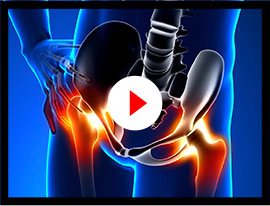